The symbol and meaning of anchor tattoo is far beyond the aesthetic sense, it also has a spiritual, sentimental connotation. It presents for the faith that the individual will not give up no matter how tough, how severe the matter is. However, on the simplest aspect, the anchor stands for the most appealing thing that has been a favorite subject of human for a very long time: the Ocean.

The Meaning Of Anchor Tattoo

At first, when it comes to anchor, people always think of those who work in corporations related to ocean, such as: sailors, customs officers, the master,… In fact, this kind of tattoo does not only suggest people about that side. When it is tattooed on your skin, it becomes a symbol with an encouraging motto: “Refuse to sink”. This tattoo is now very popular in the tattoo community; almost everyone has it on their skin. Rockers are the trend-setter when they bring this tattoo idea to the world and since then, more and more people like it and this tattoo becomes a worldwide phenomenon before anyone have realized. 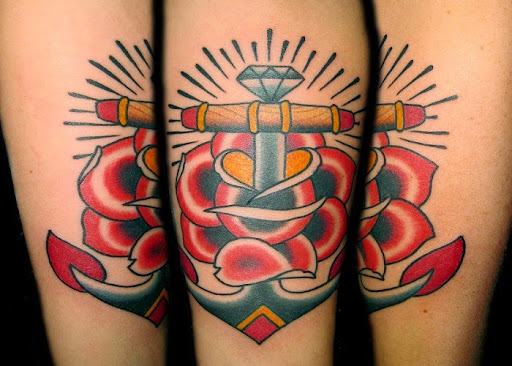 Unlike considering this tattoo contains the meaning of having relation to “the ocean” and ships, some people raise the idea that the design of this tattoo is just a stylization of the Holy Cross. It is considered as a clever way to show one’s religion without being so blatant.

This tattoo has a connotation of taking a root like casting an anchor to the bottom of the sea when the ship makes a good landfall. Moreover, it’s a great combination of strength and stability, something that keeps you strong and steadfast under any circumstances or in any adversity and it provides you courage to keep holding on what you believe.

A lot of people choose anchor tattoo to remind them that although the matters are too difficult to be solved, or the challenges try every way to strike them down, they must keep their faith to overcome every hindrances strongly.