Obviously, no one can resist the beauty as well as cuteness of dolphins. Just by a single jump out of water, dolphins can make people can’t take their eyes off it due to its flexibility and lissomness. Dolphin tattoo has these elements in their design and of course, there is a good story about the tattoo itself.

This tattoo are favored by both men and women in the tattoo community and it is designed under a variety of shapes, colors, sizes to be suitable with the one that has it tattooed on their skin. Dolphins are very smart and companionable, when they are under the water; they swim beautifully and flexibly without any efforts. Dolphins have been friends with human for a very long time, so the two species are very close to each other. Human beings assign many deep senses to the image of dolphin, such as: hope, luck, fortune, cleverness,… 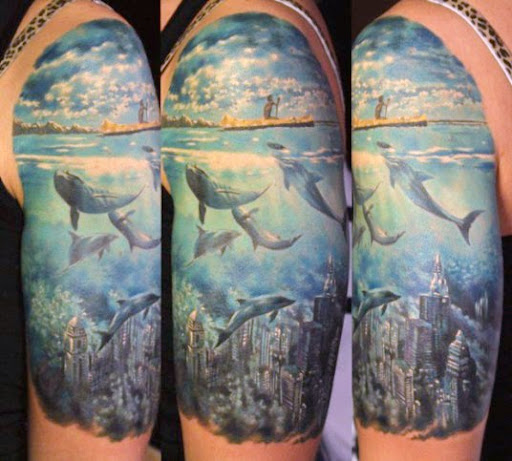 This tattoo are not popular solely based on its design, patterns or colors, it’s also all about the whole positive ideas behind this fish. A long time ago, human beings were attracted by dolphins because of its ability to stand for the pure friendship and spiritual union. Having this kind of tattoo means that that individual wants to keep reminding themselves what their core is.

Besides, due to the connotation of the dolphins, this tattoo is believed to present for cleverness, love, warmth, self-determination, self-sacrificing, coherence between individuals, influence and perfection. For many Christians, dolphins are the symbol of Jesus Christ, so the tattoos of dolphin are always considered as an emblematic symbol for the rebirth. Apart from these above meanings, this tattoo is also a way to show the feminine as well as the harmony of Ying and Yang.

When you are in the need of having a tattoo for yourself, you seek for the idea, the design the suits you most. Above all of that, an appropriate place for the tattoo should be taken into consideration seriously, too. Usually, the one that loves tattooing this tattoo on their backs, wrists, ankles, shoulders,… are women, not men. Men are more interested in the symbol than in the appearance.

With a lot of symbolic meanings, this tattoo is a good choice for those who are looking for the tattoo that has positive senses. I’m glad that this article helps you somehow in making choices and decisions and I hope that you would have a beauty and meaningful dolphin tattoo at the end of the day!