Grim reaper tattoos are one kind of tattoo that is special for its uniqueness. The trend of tattooing these tattoos is becoming more and more popular in the community of those who have tattoos. It’s the favorite tattoo design that men favor, however, women can have it, too.

The reaper can be tattooed on your skin in a lot of styles and designs. Usually, this tattoo is recognized in the black ink and in a big size that covers your whole arm or the whole body. This time, I will give you some necessary information about grim reaper tattoos, from its meaning to its diversified designs.

What is The Meaning?

Many of you surely have known the grim reaper image, it is considered as one of the deadly symbols in the history of the symbol. Nevertheless, in many religions, it just represents for someone who escorts you to your next incarnation. Most people can recognize the grim look and the razor-sharp scythe that are permanent traits of the reaper. These features look gloomy and somehow creepy that can scare or make anyone’s skin crawls. 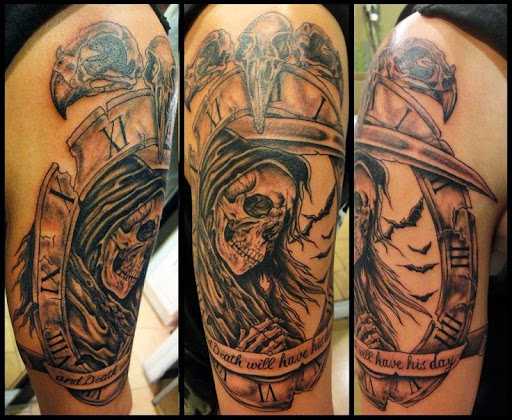 You can feature a reaper just by looking at its appearance when you have to choose a design for your grim reaper tattoos. There are some who love to tattoo him with a black hood and his scythe is put in different positions, the others have a featureless reaper with no face and empty eyes.

Because the grim reaper is the representative for death, the designer has a tendency to tattoo it in different, stunning colors while many prefer the traditional ones: gray and black. Nonetheless, you will find the mixture of red and deep oranges which are shaded around the reaper – bringing up a 3D feeling, a brand new intuitive experience.

The reaper image is a tattoo style that is attached to people who are of the old school. Yet, with the non-stop creativity of the designers as well as the artists, there are more and more tattoos that vary in colors and styles, some of them even make a break through the original style when using vibrant colors as their main inks. As the matter of fact, they are attracting a lot of attention as well as gaining the favor of the tattoo-lovers. No one, today, considers it as a devil, deadly symbol. With a better view about the tattoos, I hope that you can flash out a rousing idea for your upcoming tattoo.