Tattoo images of animals are very popular, especially birds in particular. Owl tattoos, however, are considered the best choice of all birds in the wild because of their significant meanings.

Owls are a very special species: they are named the wisest of all birds, and are a perfect symbol of both mystery and rarity. As a nocturnal creature, owls come alive and begin hunting at night or during the twilight hours, so owl tattoos can be a wonderful choice for Twilight fans, or those who are fond of the world of magic and enchantment. Moreover, owl tattoos also represent power: these birds have fierce flying skills, sharp beaks and talons for hunting and killing preys. All these features make owls a powerful, attractive and wise bird and give owl tattoos the potential of becoming a hot trend. 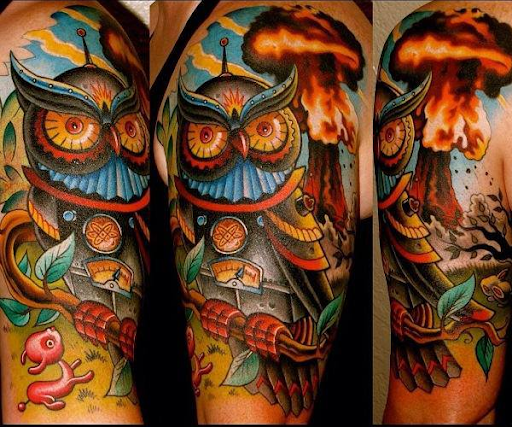 An owl tattoo contains many details, which may require a lot of effort to make. However, thanks to the bird’s distinctive shape, you can choose just a silhouette of the birds and yet people would still be able to recognize it. If you want to make your owl tattoos even more mysterious, add some extra elements such as the branches, moon or stars. Because owls are often associated with magic, it is equally good to use many colors or just black and gray; and as owls are powerful and fierce creatures, let your owl tattoo soar with its wings open.

It is important to consider the placement of your tattoo as a bad position can ruin your whole idea. After picking a perfect owl tattoo for yourself, think of the place on your body that it would fit perfectly. Some popular positions for owl tattoos include the shoulder or the back.