There are hundreds of reasons why people have a tattoo such as falling in love, separating in love, having religion, showing personality and so on. Coming to the market of tattoos today, you will be shocked by its diversity and you as well will be easy to take a fancy to own one. If you really want to take it and you are pious, praying hands tattoo may be a good choice for you. In the world of religious tattoos, this one is sparkling like a star. In my mind, praying hands is a beautiful and meaningful tattoo. Go with me to discover its world and make up your mind.

The Origin Of A Universal Symbol

There is a heart-warming story behind the praying hands symbol. The story began in the later part of the 15th century. Albrecht was an 18-year-old child in a poor and big family with 18 children. The father worked as a goldsmith for many hours every day and took on other jobs to provide for his family. Although he tried to work hard, the pressure of 18 children with clothes, foods, shelter and other expenses is not small. Albrecht and his brother had a dream to become artists, which were used to be a luxurious dream at that time. 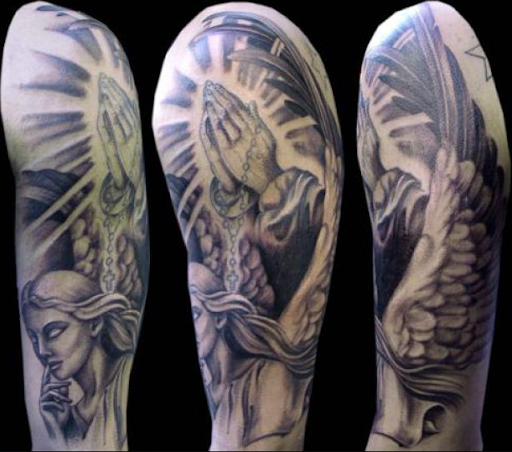 Understanding big passion of both children on art, which could help them escape the life of poverty and have a new life, father decided to give a chance for two boys. However, he just could afford to pay for one to go to art school. That golden chance as decided by the form of coin tossing and Albrecht won. He was talented and soon became very well-known as the greatest artist of the Northern Renaissance. In order to tribute to his brother, he painted the praying hands, which are now expressing the same sentiments of religion and family.

Palms-together is beautiful in religion.We close eyes during prayer is to quiet the mind while two hands placed together is to quiet the physical body. I remember there is a sentence is “When the mind and hands are silenced the spirit is more focused”. There are many different meanings staying inside each tattoo. We have it to commemorate a member of the family, a relative, a friend or a person you admire who passed away. We have it to mark and raise ourselves up in hard periods in our life. Sometimes, we have it to just praying for the happiness and the health for our family. In general, the religious belief and comfort are what people aim to in life.

There are many beautiful and impressive samples of the praying hands tattoo, let see and consider if it is suitable for you or not.

I suppose that you are mature and smart enough to have your own decision. I just want to make sure that you think carefully about your religion, your faith to it, the tattoo and even other religious tattoos before making the last choice. And if you choose to take it, don’t forget to find and believe in a good artist. Have a good one and don’t let yourself regret later!