Originated from a Mexican religious holiday, sugar skull tattoo is becoming more and more popular, especially in the tattoo community. However, they are designed mostly for the artistic purpose than religious. This article will uncover the real meaning of them for tattoo-lovers have a deep understanding about it as well as love it more.

All of us recognize the skull symbol as something represents for the death, darkness, it’s somehow creepy and, of course, people don’t have much favor for it. Surprisingly, the Mexican uses sugar skull as a decoration on the headstone of those who have passed away. They decorate their beloved’s gravestones with sugar skulls on the Day of the Death (Dia de los Muertos) festival celebrated on the 1st and 2nd of November. Contradict to the normal skulls, sugar skulls are made of sugar and covered by colorful patterns, feathers, icing,… This helps the skulls don’t look scary anymore.

Mexicans write the name of their passed away beloved on the forehead of the skull along with other traditional stuffs, such as: food, marigolds, candles,… for guiding and luring their deceased back to earth. There are various sizes of skulls suitable with the age of the deceased, for example: small skulls are for the passed away children while the larger ones are for the adults. So the skull may seem to be a scary symbol for death yet with the Mexican, it has a more positive meaning. 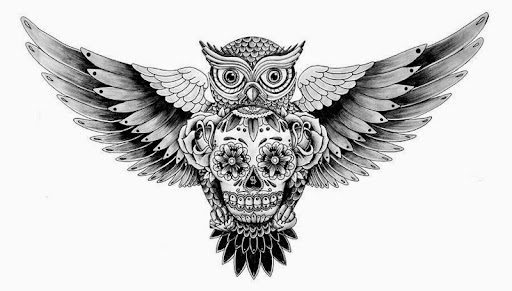 Being affected by this Mexican tradition, a lot of people all over the world are now interested in sugar skull and even the tattoo-lovers have sugar skull tattoo for themselves. They tattoo it when they get into the tattoo, no matter where they come from and whether they are Mexican or not. With non-stop creativity, tattoo designers have created today day-of-the-dead tattoos by combining the original patterns of it and other artistic features, such as: flowers, whirl, stitches, dots, candles, webs,…

Each pattern has its own meaning. A sugar skull tattoo with flowers decorates the eyes implies life whereas webs represent for death. If you see someone have a day-of-the-dead tattoo with firing candles, you will understand that they want to symbolize the reminiscence. Isn’t it interesting?

Although, this kind of tattoo is no longer the same as its beginning, it’s worthy to have more information about this beautiful, meaningful and artistic tattoo. If you are looking for a unique, outstanding tattoo, then this tattoo would meet your demand.